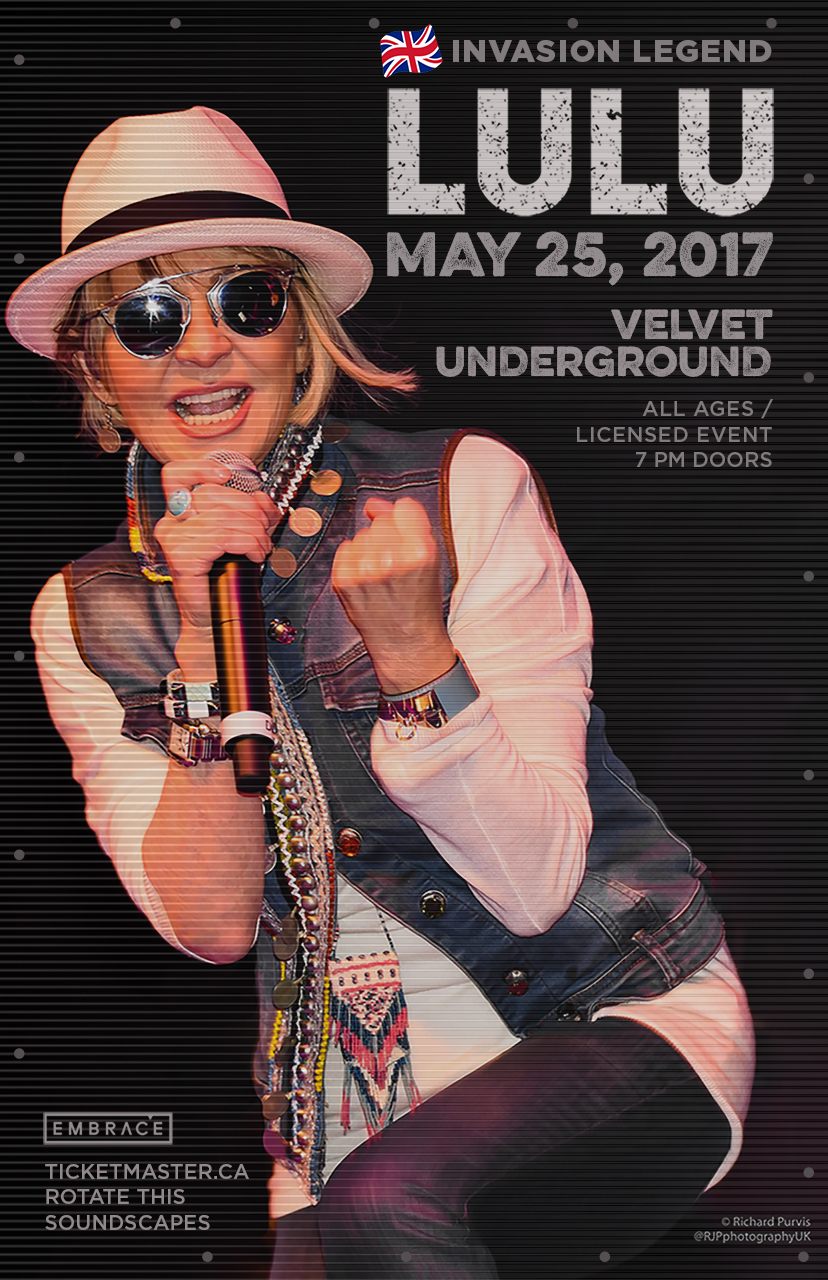 Lulu has been in the music business for 51 years. Yet she seems utterly undimmed by time, slim, vivacious and energetic, with an appealing combination of bright eyed sprightliness and a very adult, no-nonsense directness. “I was thrown into this business in my childhood. It’s a minefield, you see so many people harmed by believing in their success. You think you’re invincible, then crash, it all comes down. I’ve managed to look like I’m holding it together but it ain’t been easy. This is what I’m talking about, everything that I’ve been through in my life. It’s really about going beyond the problems everyone’s got. I’ve been there, done it but now I’m living in the solution. That’s what it’s about!”

Lulu started young, a 15-year-old Scottish soul sensation. Born into the tough world of Glasgow’s working class tenements in 1948, she was raised plain Marie McDonald McLaughlin Lawrie. She has been such a fixture of the British entertainment landscape for so long now, she is not particularly defined by her musicality. She has sung at the Eurovision, hosted a Saturday night light entertainment TV show, acted in films, theatre and television and sold her own brand make up. “In the beginning it was never about being famous. I wanted to sing, whether I got paid for it or not. Then all of a sudden I had a hit record. Bam! Boom! You don’t know what’s happening, it’s euphoric and terrifying at the same time, and you kind of get caught up in it.”

She has been twice married (the first time, aged 19, to Maurice Gibb of the Bee Gees) and twice divorced, enjoyed an infamous encounter with Jimi Hendrix in the Sixties and secret romantic liaison with David Bowie in the Seventies. “I’ve been through a lot in my life, a lot of struggles. I’ve been one of the luckiest people but I’ve also been thrown from pillar to post, emotionally.”

It is probably fair to say she hasn’t always made the music she wanted to make. But along the way there have been such stone classics as 1967 number one To Sir With Love, 1969 soul stormer Oh Me Oh My (I’m A Fool For You Baby), 1974 Bond theme The Man With The Golden Gun, Bowie collaboration The Man Who Sold The World and even her 1993 smash with Take That on Relight My Fire. Her most recent, self-written album “Making Life Rhyme” (Decca) stands head and shoulders with Lulu’s very best and most loved work.

Britain’s first great female rock and soul voice performed a successful nation-wide tour in 2015, which culminated with a summer packed with festival appearances including the infamous Glastonbury. In 2016, she went back on the road with 35 date sell out UK tour, stretching from Aberdeen to Torquay, doing what she loves best. Such was the success of this that a 40 date tour has been booked for 2017.